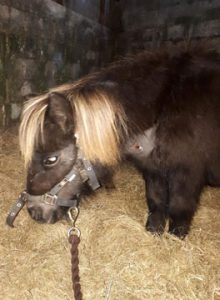 Jaffa-Cake is an 18-month old Miniature Shetland colt (entire male) owned by Becci, one of our nurses.

When Becci bought him in October he was unhandled and wild. Before Jaffa-Cake could be castrated he had to learn to be handled. Luckily for Becci he’s very food orientated so it didn’t take long. After working with him for six weeks she felt Jaffa-Cake was able to cope with meeting new people and going through his procedure.

Our vets Harriet and Nicole were tasked with Jaffa-Cake’s operation. On the day, Becci clipped a patch of hair from his neck so Harriet could insert a catheter to administer his sedation and anaesthetic. He coped with both of these really well. Once sedated vet Harriet administered his anaesthetic and a towel was placed over his eyes to prevent him reacting to stimuli. When Harriet was happy Jaffa-Cake was anaesthetised, vet Nicole castrated him. After his castration was done, he was allowed to gently wake up and recover in his stable. He’s now made a full recovery.

Monday to Friday: 9am – 6pm
Saturday: 9am – 12pm
Consultation by appointment

We are using cookies to give you the best experience on our website. Find out more about which cookies we are using or switch them off in settings.

Our website uses cookies to distinguish you from other users of our website. This enables us to provide you with a good experience when you browse our website and also allows us to improve our site.

You can find out more on our cookie page at any time.

If you disable this cookie, we will not be able to save your preferences. This means that every time you visit this website you will need to enable or disable cookies again.

This website uses Google Analytics to collect anonymous information such as the number of visitors to the site, and the most popular pages. Keeping this cookie enabled helps us to improve our website.

Please enable Strictly Necessary Cookies first so that we can save your preferences!